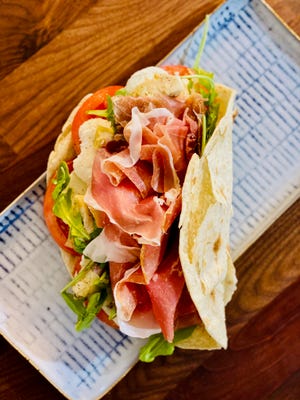 These Newport area restaurants will leave you saying

From the fertile Tuscan countryside to the lemon-drenched breezes along the Amalfi Coast, Italy’s gastronomic map is as delicious as it is diverse, with culinary specialties moored to each of the country’s 20 distinct regions. In Newport County, you’ll find more than a dozen Italian eateries, and among them, a wide range of cuisines. Perhaps more than any time in recent history, native Italians are helming restaurants and marketplaces here. Each brings a unique taste of home to local palates — sometimes seasoned with an American twist.

Originally from Bologna in the Emilia-Romagna region (widely considered the cradle of the country’s legendary cuisine), chef Marco Minieri introduced the “piadina” at his deli-meets-market, Bottega Bocconi, which he opened in Middletown with wife Allison in the spring of 2019. (A second location opened in Portsmouth this past June.) The rustic folded-flatbread sandwich has historically been a lunchtime staple along the northeast coast of Italy.

“It’s a very simple plate that goes back 700 years,” Minieri explains. Made from just flour, water, salt and a small amount of lard, the flatbread is warmed, then typically filled with anything from prosciutto and porchetta to mortadella (Italian sausage), marinated eggplant, ‘nduja (a spicy, spreadable pork sausage) or other options.

“Like all Italian cuisine, it’s all about simplicity,” says Minieri. His most popular piadina is the P & C, made with prosciutto di parma, Roman marinated artichokes, arugula, San Marzano tomatoes, mozzarella, oil and vinegar. Though simple, there’s a certain harmony to the success of the piadina; a careless smattering of ingredients would compromise the integrity of the centuries-old sandwich.

“In the beginning, people, they ask me for American Italian sandwich – the grinder – but we don’t do that here. We try to keep everything the most Italian way possible,” Minieri explains. In the U.S., a typical Italian sub includes salami, pepperoni and ham. “In Italy, we don’t put two or three meats together because if you do, you never can taste just one meat; it’s a mix of flavor and you really don’t understand what you’re eating,” Minieri says. “I don’t say it’s bad, but we try to keep everything simple in Italy, and now at Bottega Bocconi.”

When she opened Lucia Italian Restaurant on Thames Street in 1993 with her husband Ennio Luison, Lucia Tacchi was focused on building a menu around Northern Italian cuisine, which included dishes that exemplified the flavors of Tuscany and her native Vicenza (a city about 30 miles west of Venice). “In the north, we use more herbs in sauces than spices and garlic: fresh rosemary, thyme, sage, mint, parsley, basil,” she says. “We have red sauces, but we do a lot of creamy sauces, also. In the south, the temperatures are usually warmer, so they tend to use more raw stuff, more garlic and tomato. Because in the north it is usually colder, the culinary tradition is more richer foods.”

One major adjustment the restaurant had to make after opening was the amount of sauce with each dish. “Oh yes!” Tacchi says with a hearty laugh. “In Italy, you eat the pasta with the sauce, but the quantity of the sauce is one-third of what we eat here, because you need to taste the flavor of the pasta.

“We like the dishes to be well-balanced so you can taste every ingredient, without [sauce] covering everything,” she continues. “When you eat the pasta, there shouldn’t be any sauce left on your plate. Here people say, ‘Where is the sauce?’”

While Tacchi says they’ve tweaked a few things to accommodate American tastes, some diners make requests that would compromise the integrity of the dish. “Here people are used to stronger flavor. Sometimes we adjust a recipe so that it’s still authentic Italian, but more to the American palate — without losing Italian authenticity.”

You won’t find spaghetti and meatballs, lasagna or veal parmesan on Lucia’s menu, as these don’t fit into the restaurant’s Northern Italian flavor profile. Tacchi would prefer to introduce diners to some of her other exceptional Italian dishes, such as Manicotti al Ragù: manicotti filled with four cheeses baked with béchamel sauce, tomato and ragù Bolognese, the traditional Northern Italian meat sauce. Another standout is the Tagliatelle ai Gamberi e Cappesante, an egg ribbon pasta sautéed with shrimp, scallops, extra-virgin olive oil, fresh garlic, red pepper flakes and fresh basil.

Tami Mullins and her family were stationed in Naples with the U.S. Navy. “All of our best memories from living in Italy are centered around the amazing, fresh and delicious food we enjoyed,” says the Newport resident. Now she and her husband Matt gravitate to local restaurants and related businesses owned by Italians because they “bring an authentic feel of Italy right here to our City by the Sea.”

Mullins says the Spaghetti alle Vongole from Pasta Beach, owned by the Ropolo family, “brings us back to our day trips driving along the beautiful Amalfi Coast.” The dish is considered a classic in Italy. “It’s actually one of my favorites on the menu,” says Eldredge Ropolo, whose parents, Susie and Gianni, founded the restaurant in 2002. The cornerstone of Spaghetti alle Vongole, explains Eldredge, is the Vongole verachi: small, flavorful Italian clams, considerably slighter than a New England clam. A hearty helping of the clams is sautéed in garlic and olive oil with an added dash of red pepper flakes, salt and pepper while the fresh spaghetti cooks. The entire aesthetically enchanting dish takes just minutes. “It’s prepared on the moment,” he says. “There’s no premade sauce or anything.”

The Ropolos never set out to be restaurateurs. Gianni met Susie, a native New Englander, in Milan. When they’d spend time in Gianni’s native Torino, they dined daily at a small trattoria serving simple, fresh, traditional cuisine. After marrying and spending time at their summer home in Newport, Gianni would continually call his mother in Torino for family recipes to cook. The Ropolos’ guests would rave about the couple’s savory, seemingly effortless dishes, and Pasta Beach, the first of the couple’s three restaurants (they’ve expanded to Providence and Boston) was born.

Now an integral part of the family business, Eldredge says each location has at least two chefs from Italy in the kitchen. The menus all share Italian staples, including Mezze Maniche Carbonara and Spaghetti al Pomodoro e Basilico (tomato sauce and fresh basil), but they differ a bit from place to place. “The chefs all come from different regions in Italy, so they decide what to put on the menu from their region, from what they grew up eating,” Eldredge says.

When Mullins, an avid home cook, wants to replicate the dishes she treasured during her time in Italy, she heads to Bottega Bocconi for imported ingredients including capers, alici, Pasta di Gragnano, guanciale, prosciutto di parma and parmigiana reggiano.

At the newly opened Mozz (see Newport Life’s January/February issue), Luca Mignogna makes fresh, just-stretched, still-warm mozzarella on-site. The cheese monger hails from Campobasso in the Molise region of southeast-central Italy. The region, he says, is known specifically for stretched-curd cheeses including mozzarella and caciocavallo. Not only does Italian cuisine differ by region, it can differ noticeably within each region. “The beauty of Molise is every village has its own typical dishes. Even if they are within five miles of each other, you can find flavors and raw products that are completely different,” Mignogna says.

Eldredge Ropolo concurs, using spaghetti pomodoro as an example. “Spaghetti pomodoro is always funny because there is no real ‘recipe’ to it. There’s a basic concept of spaghetti pomodoro, but everybody grows up making it a little bit different.” While people might vary it by introducing a different type of tomato, or making it with mirepoix, inevitably they swear by the one they’re used to eating. The Pasta Beach version is identical to the version in the Torino trattoria that his mother fell in love with.

Although they’re 4,000 miles apart, Molise and Newport share similarities that influence their culinary creations, Mignogna says. Both, he notes, are perched on the ocean and have ample farmland, so seasonal ingredients dictate the menu, whether you’re dining out or cooking at home.

A trip to Italy to savor the local flavor might sound idyllic, but for instant gratification, Newport County residents can be grateful that Italian chefs have brought Italy to us.