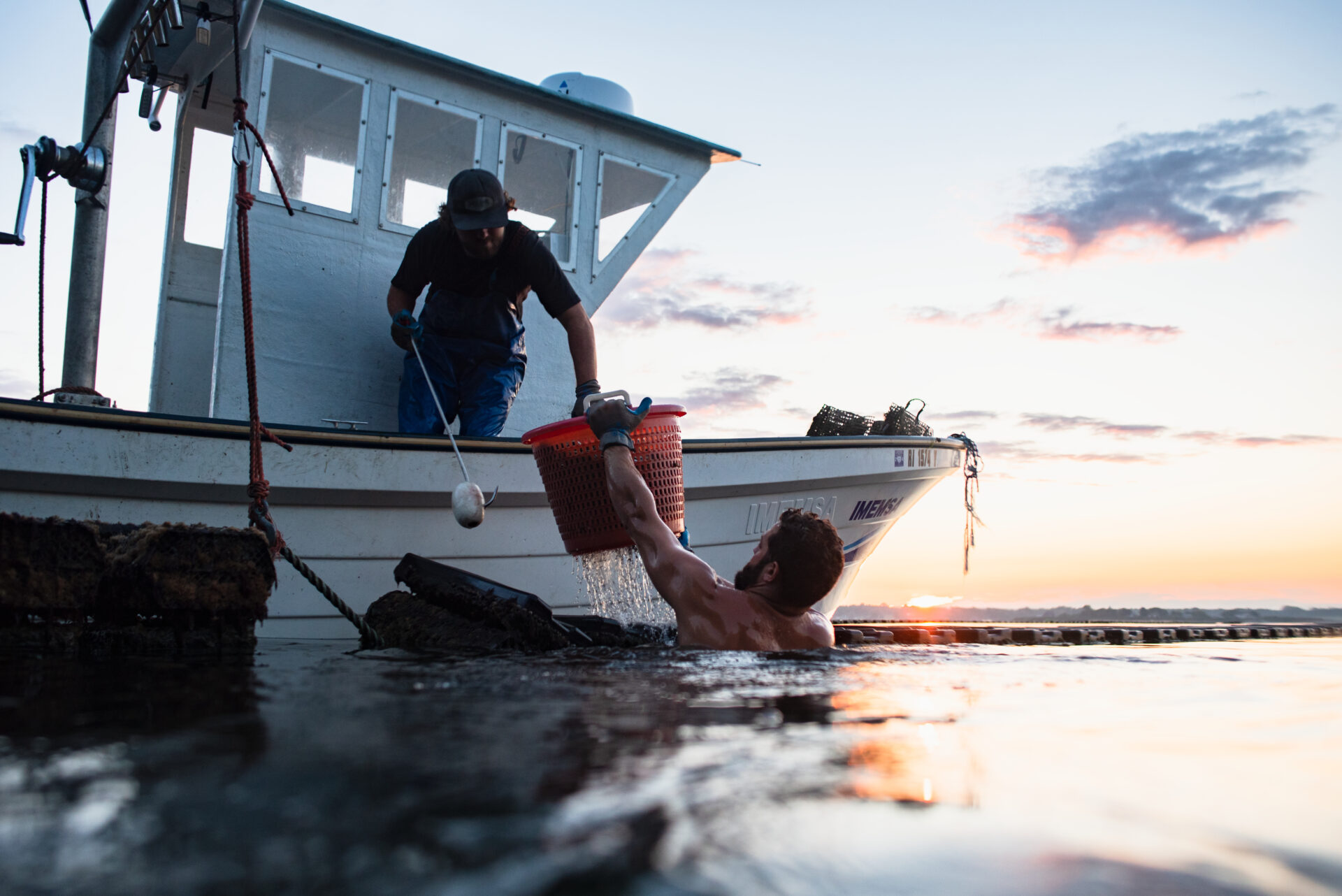 From The Bay to The Bar

Although briny bivalves have been found in Narragansett Bay for millenia, a new crop of oyster farms and farmers are serving up sweet, salty or savory slurpers, best enjoyed at local raw bars

The sun barely peeks above the horizon, casting an orange pink glow over Narragansett Bay. At less than half a square mile, Hog Island, between Bristol Point and Poppasquash Point, is hauntingly quiet, save for a skiff gliding over the island’s protected cove. The morning ritual is everything Kyle Hess loves about being just one of a growing number of Newport County oyster farmers.

Hess’s Chessawanock Oysters (“Chessawanock” is the Native American name for Hog Island), also served under the “Butter& Brine Oyster” brand name, are firm, fleshy oysters with a smooth, earthy finish. They are just one of the many varieties satisfying consumer demand for the briny bivalves coast to coast.

Oysters are big business in the smallest state. In 2021, oysters remained Rhode Island’s top aquaculture product with more than10 million sold for consumption in the state — and many far beyond our borders. Oyster and oyster seed sales combined exceeded $7.5 million last year, and the 84 oyster farms statewide employ more than 200 local men and women.

While the lion’s share of oyster farms can be found on brackish saltwater ponds throughout South County, Newport County accounts for nearly a quarter of the state’s oyster farms, and Middletown’s Salt Water Farm is the largest at 50 acres. Portsmouth is home to 11 oyster farms, Jamestown has six, and Little Compton and Tiverton each have one.

Though Narragansett Bay is their common denominator and the farming fundamentals remain the same — the Rhode Island Coastal Resources Management Council requires prospective oyster farmers take Applied Shellfish Farming, a 14-week course at Roger Williams University that teaches the ins and outs of growing oysters, quahogs and other shellfish species commercially— each oyster farm has its own methodology and specified leased acreage, resulting in oysters that differ wildly in taste and texture from farm to farm.

“They talk about merrior in shellfish, much like terroir in wine,” says Benjamin Goetsch, the aquaculture coordinator at CRMC. “There’s going to be a very big difference in flavor, particularly the salinity.” Environmental factors, including water chemistry, depth, time of year they are harvested and the oyster’s diet play major roles in the flavor, Goetsch says.

As filter feeders, oysters get their nutrients by feeding on the phytoplankton and algae in the water they filter — 50 gallons a day for a fully mature oyster. “It’s just like grazing your cattle on different feed. You are what you eat, right? You’re just going to get a different flavor, and you can even get a different flavor around Newport County,” says Goetsch. “Those oysters in The Cove in Portsmouth are going to taste different than the oysters off of Jamestown.”

Harry Graham agrees, and he might just have one of the most sophisticated — and qualified — palates around.

As the raw bar chef at Newport’s Midtown Oyster Bar, Graham waxes poetic about meaty mollusks from as far off as New Zealand and British Columbia and as close as eight miles north of his six-seat marble bar inside the Thames Street restaurant where oysters are shucked, served, slurped and savored on the half shell. A chalkboard oyster menu is update ddaily, and locally grown oysters, called Aquidneck Cups, typically make the roster these days.

“I like them,” says Graham. “Aquidnecks in general are a bit saltier in my opinion, but oysters change their profile through the year.”

Graham explains that this time of year is his favorite to eat oysters, as they are plumping up for winter. As an oyster’s fat reserves deplete, the flavor shifts. “Come spring, they’re setting up for spawning, and in summertime, they lose a third of their mass,” resulting in a leaner, saltier oyster, he says.

Aquidneck Cups are grown by Dan Torre whose Aquidneck Island Oyster Company is one of the newer aquaculture farms in Rhode Island. Hailing from a long line of fisherman and shellfisherman, Torre, who holds a master’s degree in marine science from the University of Delaware, secured his farm lease just as the pandemic started — with his first harvest coming to market last year.

“We sell to a couple restaurants which describe them as a ‘subtle brine with a smooth creamy finish’,” says Torre, who, in addition to Midtown, points to Newport Restaurant Group restaurants, Gulf Stream Grill in Portsmouth, TwoTen Oyster Bar in South Kingstown and Bayberry Garden in Providence and the Dave’s Market chain as some of his customers. “Definitely a little more briny than some of the other farms.”

Torre calls his three-acre farm on the banks of the Sakonnet River near Portmouth’s Glen Manor House “a high energy environment” where his crop is exposed to the full salinity of the ocean, imparting flavor. “They get tumbled by the wave energy of the river and form a nice deep cup, hence the name Aquidneck Cups, and in the winter they get tumbled around like crazy, sothey are super pearly white.”

Harvesting 52 weeks a year, Torre says even in the more challenging months, far removed for the halcyon days of autumn, his is a rewarding career, citing both the positive environmental impact of oyster farming and the dock-to-plate dining experience he provides. “It’s pretty cool that the same day we are harvesting, someone is usually eating them that night.”

While many oyster farms are new to Rhode Island, oysters are anything but. It’s well known that the indigenous people of Narragansett and Wampanoag tribes were prolific shellfishermen, incorporating the abundance of wild shellfish in their diet, as emphasized in the 1643 writings of Roger Williams, the English colonist who is considered Rhode Island’s founder. Prosperous Boston merchant-cum-Newporter John Banister(1707-1767) wrote to his wife Hermione Pelham (who he wed at Trinity Church) about his desire for oysters which at the time, were plentiful in this robust colonial seaport.

“Back in the day they were ubiquitous,” says Goetsch, a confessed history buff who prior to joining CRMC, put his degree in archaeology from Brown University to work on digs around the world. Goetsch says that while plenty of oysters were enjoyed raw, far more were processed, canned locally and even pickled. “You could use them as an ingredient in your cooking to provide flavor — salt, right? But also fortify [foods] with some extra protein and nutrition. So, it really was the food of the masses, as it was very cheap and available. You could add it to your oyster stuffing or oyster dressing.”

A few years ago, in his research, Goetsch found a Colonial-era recipe for oyster pie and channeled his inner chef. “It’s like a chicken pot pie, basically. I made it one year for Thanksgiving, and it was delicious!”

By the late 1700s, Rhode Island’s native oyster populations were being depleted and the General Assembly passed the Oyster Act of 1844, the state’s first aquaculture law, which introduced formalized leasing. What followed was a tumultuous period at best, but by the end of the 19th century, Rhode Island’s oyster empire was booming, peaking in 1911-1912 with nearby Warren being home to 12 oyster houses.

“I think about a quarter of Narragansett Bay was held underlease for the purpose of shell fishing and oyster cultivation,” says Goetsch. “In a lot of the areas where you see modern oyster farmers now, if you look at the old maps of where these leases were before… there’s a lot of overlap with those old growing grounds.”

Sadly, pollutants became a great threat to young oysters, while The Great Depression, the Hurricane of 1938 and World War II all played roles in the decimation of the industry. By 1954, the last oyster house, the Warren Oyster Company, closed shop. The industry would remain dormant for nearly 25 years until a pair of oyster ponds on Portsmouth’s Prudence Island were established with the blessing of the newly formed CRMC, which slowly resuscitated an industry and reshaped the once-cumbersome permitting process.

An integral part of the new dawn of shellfishing in Rhode Island was the founding of American Mussel Harvesters in 1984.With one phone, one truck and one mussel boat, Bill Silkes built the company from the ground up to become one of the largest producers of mussels in North America. In 2001, Silkes started Salt Water Farm with 50 acres of Narragansett Bay’s East Passage off Middletown’s coastline where son Mason oversees the operation (his two brothers are also part of the company).

“Umamis are the smaller, petite-type oyster. Beaver Tails are the largest ones, and Quonset Points are more circular ones,” says Silkes. Grown in water 30-50 feet deep, Beaver Tails are known for a briny burst at the upfront and plump, firm meat that finishes smooth.

While their growing techniques range from floating cages and flip bags that tumble the oysters with every tide cycle to airdrying, longlines or bottom cultured, any contemporary Newport County oyster farmer will agree: oyster farming has astonishing environmental benefits.

“Oyster farming — it’s the most efficient way to grow protein,” says Kyle Hess. “When you look at a table or graph that actually lays out people who farm soybeans, people who farm livestock, people who fin fish farm — like a salmon farm — all these things that require input of all kinds of things, whether it’s fresh water, fertilizer or food, we don’t do any of that. We don’t do anything to our oysters. We just provide them a safe haven.”

Since Hess started farming in 2012 in Hog Island’s cove which, he says, was mostly devoid of life, he sees tautog fish, blue crab, sea robins, eels and other sea life regularly.

“The only byproduct is cleaner water,” says Goetsch.

PreviousPrevious post:All Decked Out
NextNext post:“We all need to give back”
advertisement