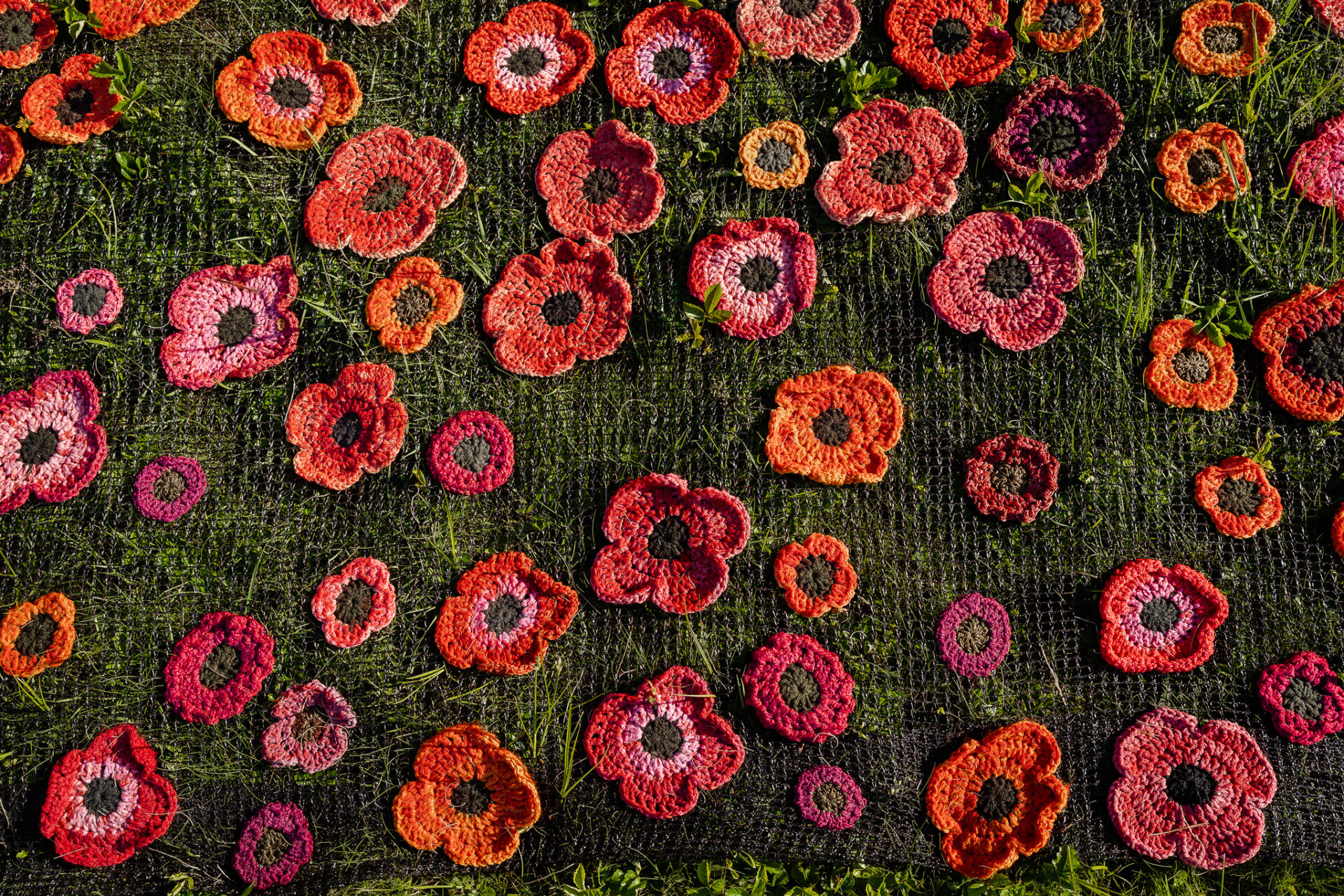 Getting to Jamestown from Newport can sometimes feel like more of a journey than a 10-minute drive might otherwise be. It could be the island mentality, which, especially on beautiful days, makes leaving Aquidneck Island’s landmass for anywhere else seem tricky no matter how wonderful the destination.

It could also be the sheer grandeur of the actual passage between the two communities, as the Pell Bridge soars over Narragansett Bay far below, where land and sea are crocheted together by links both delicate and powerful.

Jamestown, throughout its long history, has been a place imbued with movement, as the Jamestown Arts Center’s Biennial art exhibition, which spans Conanicut Island’s length and breadth, seeks to emphasize, celebrate and consider.

The guiding concept for the exhibition — and the name of its current iteration — is Passages, a theme addressed insistently in the style, form and content of all its pieces

In the airy indoor-outdoor space at the Jamestown Arts Center, where the nonprofit organization is also hosting several of the live installations that form part of the Biennial, representatives Danielle Ogden and Lucy Paiva explain that the exhibition seeks to evoke a sense of continuity — between then and now, past and present, especially in the current pandemic era in which these periods have seemed to stretch and merge.

These representations of time passing take many forms: For example, in August, artist and educator Thomas Culora ran an interactive workshop where participants created “windchimes” from wood, paper and community-sourced records of emotional changes during the hard days of 2020 through 2022.

Interdisciplinarity of this kind is one of the “guiding tenets” of everything that happens at the Arts Center, which offers exhibitions, classes, informative programming and many other engagements. The Biennial takes this idea in hand, incorporating works that use historical artifacts, huge sets of collated environmental data, and aspects of the natural environment made available to the artists by the island itself.

The outdoor artworks displayed all over Jamestown were compiled through a specific call for pieces put out by the JAC, with artists selected by a blind jury comprised of experts, island residents and community members.

It was important, Ogden explained, that the “passages” that are central to the collection could “be reflected in any way,” especially as the widespread nature of the collection and its locations around Jamestown mean that its residents will have been “living with the artwork for six months” and “experiencing the sculptures within the community” by the time the exhibition closes at the end of October.

The Biennial’s collection can be experienced in any order. Notably, each piece’s title placard is also fortified with a scannable QR code that links to an audio file of the artist — or artists — describing the work.

Should someone wish to start at the Arts Center, one of the smaller sculptures is located nearby, at the Valley Street playground. Paiva noted that many of the children who frequent the popular destination have been very excited by the bronze-cast turtle and giraffe of Linda Hoffman’s piece, “Refuge.”

When it was first installed, she said, the work was surrounded by “lush grass,” but in the summer heat, the crisped, ochre leaves around it instilled the work with anew mood of anxiety and loss. Hoffman made the piece to show “two endangered creatures, a turtle and a giraffe…rescuing humanity even though humans have destroyed their habitat.” The static, metallic “act of salvation” that this statue depicts is just one instance of the exhibition’s attention to our changing times.

Ogden and Paiva’s language when talking about the installations also reflects movement and flow; some pieces, they explain, like Eileen Travis’s “The Poppy Field,” are placed close to tourist destinations like the newly renovated Jamestown Windmill, and some are made to be “stumbled upon.”

Travis’s piece is a striking scarlet carpet composed of netting and more than 3,000 hand-crocheted poppies, which she describes as “an idea born out of the pandemic.” Poppies symbolize the remembrance of war in many cultures, and Travis describes her piece as invoking a sense of the similarly “staggering” magnitude of the losses of the Covid pandemic. She also wanted to have the poppies represent a “strong symbol” of the hope on which our communities rely.

“Six of the First”

Jean Marc Superville-Sovak’s “Six of the First” engages with a different — but crucial — aspect of Jamestown’s history of life and death, as it invites viewers to speak the real, recorded given names of six enslaved women forcibly brought to Conanicut Island in 1743: Yallah, Morandah, Mowoorie, Simboh, Burrah, and Yearie.

Superville-Sovak said his work employs history as “raw material.” His creative practice of “truthful speculation” invites audiences to engage with aspects of the passage from past to present, and to remember and invoke the reality and importance of those whose lives have been left out of the conventional archive. In this piece, below this list of names now to be honored, remembered and spoken, the artist adapted an image of King James II and his queen to incorporate traditional women’s ceremonial masks from Sierra Leone, the home of these women before they were abducted.

And then there is Keith Francis’s large wood-and-aluminum sculpture “Fences,” which stands close to Superville-Sovak’s piece — and comments on the history of violence against people of color in the United States.

Created in response to the Black Lives Matter movement, this “fence” either looks like a solid and impenetrable barrier or an open and inviting entryway. Francis made clear that this was intentional; there “shouldn’t be a front or a back” to the work.

He explained that his hope for the statue is to suggest a way forward inspired by Dr. Martin Luther King Jr.’s ethos of nonviolence, where “instead of violence and ripping things down … there could be something soft.” The sculpture takes a classic American image — the white picket fence — and warps it into plastic gyrations, symbolizing a need for flexibility and change.

“The Ephemeral Nature of Time”

Peter Diepenbrock’s sculpture “The Ephemeral Nature of Time,” located less than a two-minute walk away, is also composed of metal and similarly changes depending on the position of its audience.

Diepenbrock described his piece as illustrating “a dichotomy between a fixed object in space and an experience which is the opposite of that.” Many light-catching dichromatic and clear lenses cover the abstract piece, which was assembled “totally spontaneously.”

The viewer is a participant in the sculpture as they walk past it and stand observing it, as is everything else they see reflected in its many surfaces. For a static sculpture, it’s full of motion, as are the pieces by Superville-Sovak and Francis. Each sculpture asks the viewer to see more than the sum of its parts, as it reflects, reflects upon, or makes newly visible the community and the culture that surrounds it.

Amelia Wilson’s piece “Lookouts and Letters” takes this attention to perspective very literally. Inspired by the artist’s own childhood and the work of Wes Anderson, whose film “Moonrise Kingdom” was filmed partially in Jamestown a decade ago, the colorful, nostalgic piece at Godena Farmis made up of two “lookouts” facing each other at a small distance.

These are small structures filled with collected objects — letters, clocks, postcards, telephones — which invite the participants to step in and interact with their surroundings. The piece also, as Wilson says, asks a viewer to look out at“ the quietness of the field” around them as if it were “their own little world” and as though they were in “an earlier time, free of worry.

Many of the other pieces in the exhibition also take up the themes of collecting and accrual through time, like the sculpture “Wrack Line” by Melody Drnach, Janie Harris, Anne Kuhn-Hines and Mary Meagher, which shows the“ predicted consequence of sea level rise” in the area by 2050, using shells, rocks and a beach fence.

This sculpture is placed on the beach itself and is also visible when standing in Rob Lorenson’s “Gateway,” a large, brushed-metal arch. This piece contains within the confines of its curve a partial snapshot of the Pell Bridge behind it, with the tiny dots of moving cars just visible in the distance. Stepping through the arch, as viewers are encouraged to do, is itself an act of passage.

The Biennial, through these pieces and the numerous others placed in conversation with them, invites both visitors and residents to engage with Jamestown past and present, and to reflect on their own changing lives — in recent years and over the course of generations.

For more information on this exhibition, visit outdoorartsexperience.org.