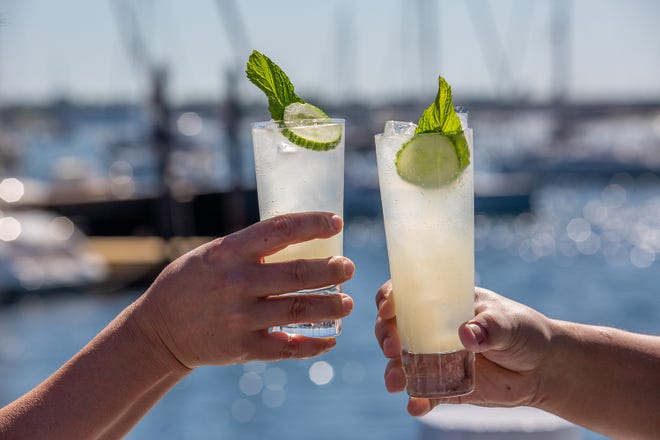 Where to find six of the best cocktails

in Newport to quench your summertime thirst

Newport shares an inextricable bond with American cocktail culture. In 1673, the White Horse Tavern opened at the corner of Farewell and Marlborough streets (where it still stands), offering our Colonial forebearers fermented beverages that were probably a safer option than the water that was available at the time.

By the late 1800s, intoxicants with a little more creativity were making their way onto menus coast to coast. As habitual overindulgence became part of the national conversation and the temperance movement gripped the country, Rhode Island was one of only two states that rejected the Eighteenth Amendment ushering in Prohibition. (The other was Connecticut.) In the 13 years that followed, Narragansett Bay became a haven for “rum runner” boats that bootleggers used to stock America’s speakeasies.

Today, our corner of the coast is filled to the brim with classic and inventive cocktail and mocktail menus. We’ve highlighted some not-to-miss concoctions, just in time for your summer consumption.

Since springtime, Jeff and Geremie Callaghan, proprietors of Fluke Newport, have been researching the 1920s, when post-influenza America experienced an economic and cultural revival. The aim was to fashion a thoughtful “Roaring Twenties” cocktail menu.

“Gin was a huge feature in cocktails in the ’20s, because it was bathtub gin,” explains Jeff Callaghan. The restaurant’s Ocean Drive, he says, is the perfect transition between their signature cocktail menu and the new one they’re introducing, since the drink is based on the South Side, a cocktail best known for being gangster Al Capone’s favorite when he trafficked gin on Chicago’s South Side during Prohibition.

“We call it Newport’s ‘South Side,’ a.k.a. Ocean Drive,” says Callaghan. Served in a tall, sleek glass with ice, the Ocean Drive is made by muddling fresh cucumber, mint and lime juice and combining it with Bimini gin, handcrafted in Maine using botanicals including hops, grapefruit zest and coriander seed.

“It is completely refreshing and satisfying,” adds Callaghan. The Ocean Drive can be enjoyed anywhere at Fluke, but may we suggest the top floor with its long bar, natural hues and harbor view. Callaghan has just one warning about the cocktail: “You have to be careful not to have four of them,” he says with a chuckle.

Next best thing to a Caribbean getaway

Newport’s maritime history combined with its robust regatta schedule makes our coastal community a hub for competitive sailors, and while these sailors know a lot about racing yachts, they also know a lot about rum.

Lifelong sailor Robert Flaxman and his wife, Leslie, bought The Reef in Newport at the beginning of 2020 — just about the worst time to jump into the hospitality industry. They used the downtime of the pandemic to completely rebuild the waterfront bar and restaurant and create new food and beverage menus, reopening this spring with an island vibe that includes Newport’s only palm tree grove.

“Our cocktail menu this summer is trying to encompass a lot of different flavors from different ports around the world,” says Justin Ferland, The Reef’s director of operations. “We’re making drinks that are light, refreshing and patio-driven.”

The must-have? The Caribbean Passion. It starts with Mount Gay Eclipse Rum, made by the oldest continuously operating commercial rum producer in the world. (Eclipse is aged up to two years in former bourbon barrels.) Balancing the savory is the sweet: the cocktail features equal parts passionfruit, orange and guava juices finished with about a quarter ounce of Coco López, a cream of coconut.  An orange slice garnish provides the final fruity touch. “It’s not one of our boozier cocktails, so to speak,” Ferland concedes. “But it’s something that brings everyone right to the Caribbean; right into vacation mode.”

A carnival-style illuminated sign that reads “FUN” glows outside Stoneacre Garden, with an arrow pointing to the entry. It’s not just a sign, it’s a promise. With its whimsical circus-colored canopy shading the back patio and refreshing Narragansett Bay breeze wafting throughout the restaurant, the setting puts you instantly at ease.

And the Purple Haze will take that state of mind to the next level. Served in a dramatic stemmed coupe, the purple concoction is topped with an egg white froth and garnished with an edible purple flower. It’s the kind of drink that instantly turns heads.

“I really wanted to introduce umeshu, which is a Japanese plum wine, to one of our drinks on the menu,” says head bartender Simion Rusu. The base of the cocktail is mezcal, an agave spirit made in Mexico, which is juxtaposed with the fresh flavors of hibiscus and rhubarb. “It’s a very easy drink to enjoy,” says Rusu. “It’s super pleasant and refreshing, even though it has the twist of a sour cocktail.”

Best history lesson in a glass

When cocoa supplies were low following World War II, an Italian pastry maker created a sweet paste made from sugar, hazelnuts and whatever cocoa he could find. The result? Nutella. So when Joe Murphy and business partners Michael “Sully” Sullivan and wife Reada Evans opened the Gulf Stream Bar and Grille at Portsmouth’s East Passage Yachting Center, he saw an opportunity to marry the restaurant’s tropical vibe with one of his favorite indulgences.

“I’ve always love Nutella and was looking for a way to incorporate it into a drink,” says Murphy.  The Mudslide, invented at the Wreck Bar in the Rum Point Club on Grand Cayman Island in the 1950s, was an obvious cocktail choice. Yet Murphy sought to make a “remix” of the frozen classic and the Nutella Mudslide was born.

“I was able to take the Nutella and make it into a syrup, render it down a little bit, and make it so it clings to the glass and into the drink,” explains Murphy. “Then you’re adding your vanilla vodka and your coffee liqueur and your Bailey’s to give it that nice little subtle twist.”

In summer, the Gulf Stream Bar and Grille can hardly keep up with demand for these frosty refreshers, and it’s not hard to see why. Chocolatey Nutella cascading down the inside of a pint glass, hints of cocoa in the Bailey’s Irish Cream and a boozy layer of vanilla vodka make for a delectable treat as you watch the boats bob in the marina. Murphy says that of the frozen drinks they offer, Nutella Mudslide is their best seller — and it’s not going anywhere. “It is the one drink that’s been there from the start and will never come off the menu.”

Best excuse not to cross the Newport/Middletown Border

You don’t have to look hard to find a local who defiantly declares they “won’t set foot downtown until after Labor Day.” While we can’t endorse such a practice, Diego’s Barrio Cantina’s It’s Always Sunny in Middletown makes a good case for staying put. Muddled strawberry, cucumber and mint harmonize with Prairie gin’s burst of sage, juniper and other subtle herbs and spices.

But wait, there’s more! The bitter Italian aperitif Aperol, which for a century has gotten its signature orange hue from rhubarb and other ingredients, is added to the cocktail shaker along with fresh lemon juice. After a vigorous shaking, the punchy potion is poured over ice and served. *Best enjoyed on the cantina’s back deck overlooking Easton’s Pond. Sunsets free of charge.

Best way to imbibe without the buzz

The biggest trend in bar menus in recent years is the addition of alcohol-free cocktails. Colorful, creative and zero proof, mocktails are as alluring as their spirits-infused counterparts. But these buzz-free bevvies let you sip all day and remain ready to play.

“The visual perception of a mocktail is almost as important as its taste, because the person that’s drinking the mocktail wants to be included,” explains Kevin Ludy, restaurant manager and beverage coordinator at OceanCliff’s Safari Room Restaurant in Newport.

But the spoils of summer, including fresh fruit, berries and herbs, he says, make creating craft mocktails a delight. To please the palates of teetotalers, Ludy invented the Aesop, named for the Greek storyteller credited with Aesop’s Fables. Double-brewed hibiscus tea is combined with double-brewed rooibos tea, a South African herbal tea, then mixed with fresh-squeezed lemon juice and shaken vigorously.

“And then I top it off with ginger beer, which gives a little bit of spice and a little bit of salty,” Ludy says. Despite what the name may suggest, ginger beer is a fermented but nonalcoholic beverage. The mocktail is also caffeine-free, so it’s a favorite of couples who are expecting. Garnished with a lemon wedge and served in a frozen pint glass, the Aesop is especially refreshing when enjoyed in an Adirondack chair on the Safari Room’s sprawling lawn overlooking Narragansett Bay.