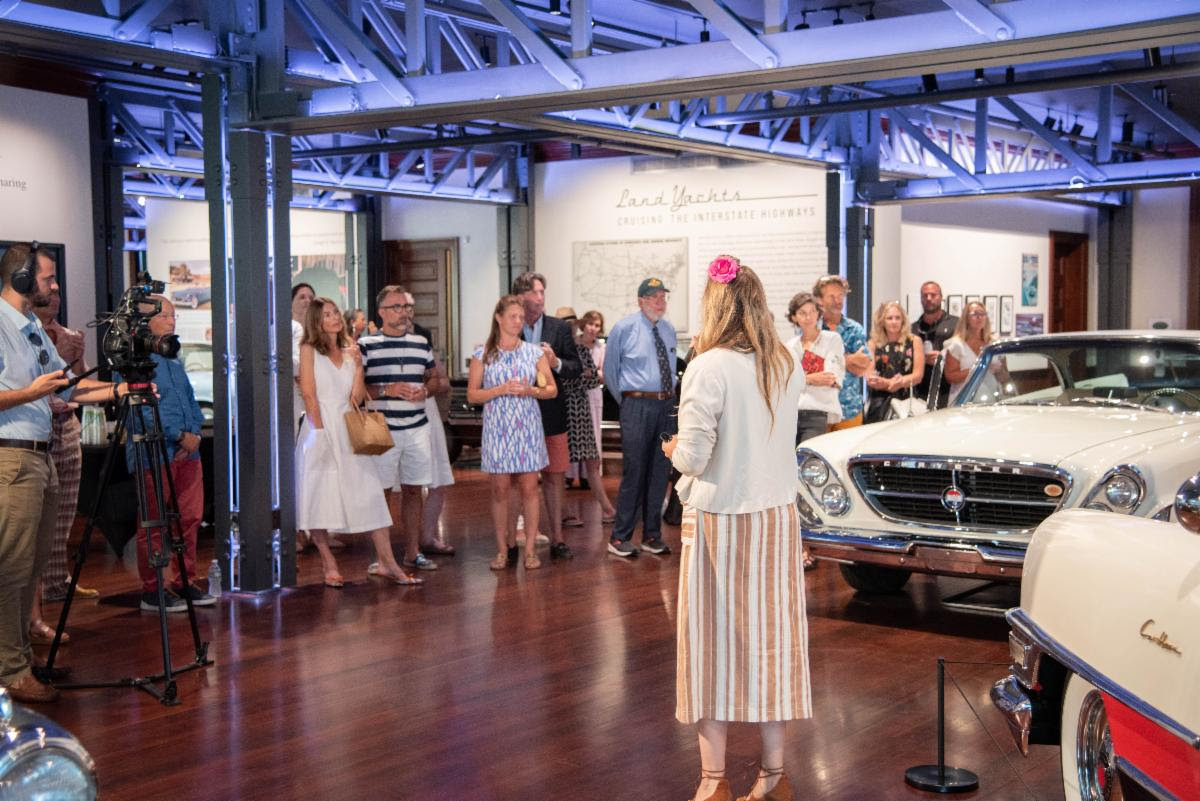 A Road Trip Through Fashion History

If Rebecca Kelly could cruise around town in a classic “land yacht,” it would be a 1955 Packard Caribbean. “I think it’s my favorite car in the exhibition,” she said of the cream convertible with red accents that’s currently on display at the Audrain Automobile Museum. The car is wide and stately and packed with deluxe features.

This particular Packard is part of the “Land Yachts: Cruising the Interstate Highways” exhibit, which was the inspiration for a talk Kelly gave Wednesday evening at the museum, which she called a “road trip through fashion industry.”

Kelly, a textile and dress historian focused on the study of 19th and 20th century textiles, trade, and retail history, who lives in Newport and teaches at the University of Rhode Island, titled her talk “Dressed for Cruising: Mid-Century Fashion for the Open Road” and highlighted the connection between the American fashion and automotive industries from 1950 to 1970.

Part of her presentation drew attention to advertisements from the 1950s, which exemplify the ways in which the fashion and automobile industries were intersecting. Some of those ads are on display as part of the exhibit, including a few for the Packard Caribbean, which was billed as “a motorcar designed for excitement, thrills and pure pleasure” and declared “America’s most glamorous Sports Car.”

One advertisement beckons drivers by asking “Why Struggle Against Temptation? Drive It Instead!” and goes on to say: “Expect to be looked at when you drive it!”

As Kelly explained throughout the evening, people would be looking at the cars – and the clothes people were wearing specifically for cruising around in these luxurious and stylish new vehicles.

One example she gave for the intersection of high fashion, cars and celebrity was Audrey Hepburn and her character in the film “Sabrina,” which came out in 1954. In that film, Hepburn portrays Sabrina, the daughter of a chauffeur, who returns home to Long Island after two years spent in Paris (and who, upon her return, finally catches the eye of her longtime crush, who also happens to be the son of her father’s employers…).

“It’s just such a wonderful film for cars – and clothes,” Kelly told those gathered.

The land yachts exhibit is on display through Sept. 5, 2022. For more information, visit audrainautomuseum.org

PreviousPrevious post:Brought Back to Life!
NextNext post:In profile: Bill Lucey and “The City of Palaces”
advertisement