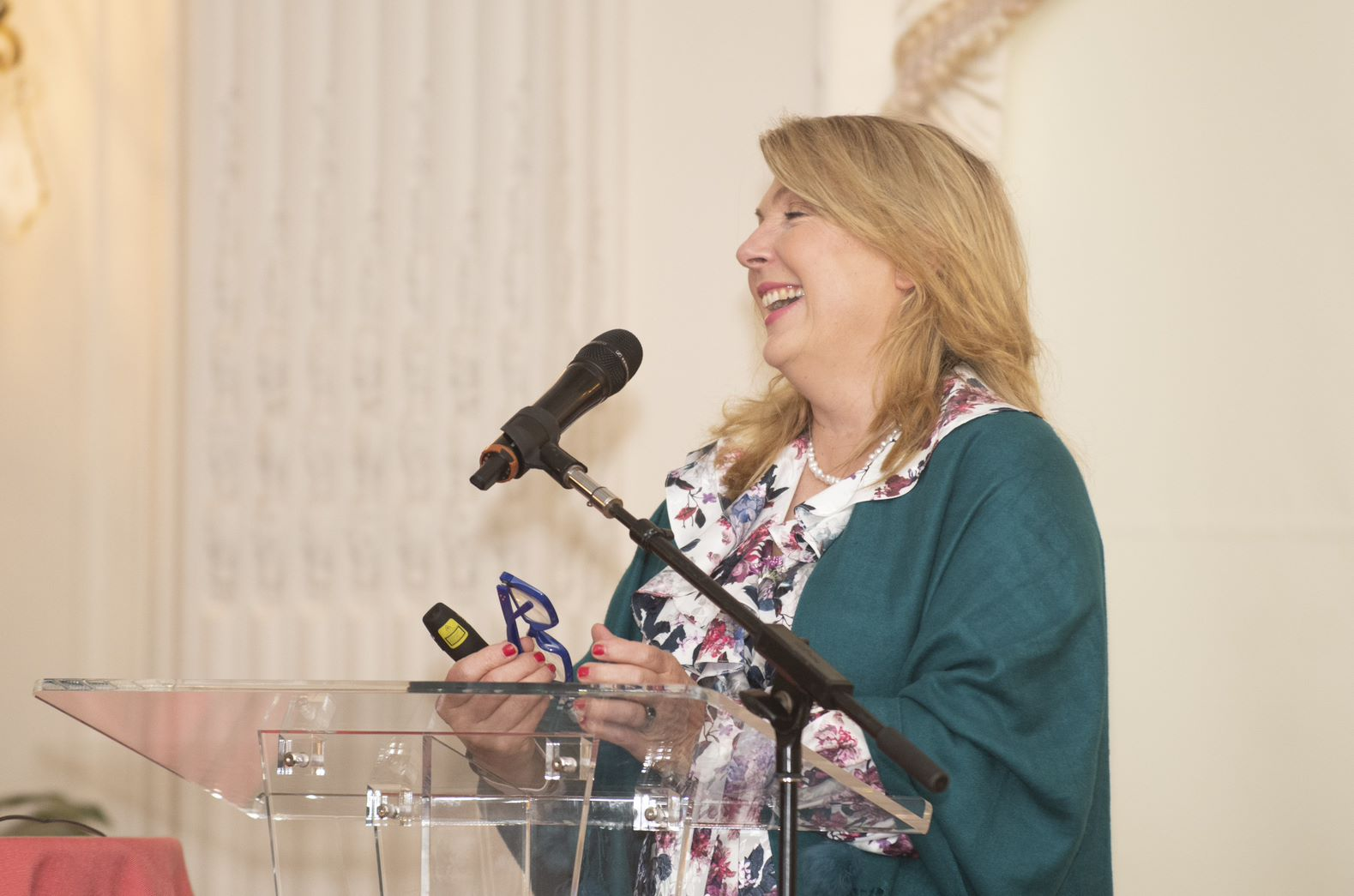 “Behind Every Great Mansion is a Great Lady”

Newport had a distinguished guest this week in the form of Lady Fiona Carnarvon, who lives at Highclere Castle, famously known as the setting for Downton Abbey, the beloved show set in England in the early 20th Century, spanning six seasons and two films. It was Lady Carnarvon’s first visit to Newport, and she spoke at several events organized by The Preservation Society of Newport County. The Newport Life team enjoyed her company during a media event Wednesday at The Marble House, and again Thursday evening at Rosecliff, where she addressed a crowd of roughly 200 attendees. At both events, Lady Carnarvon’s sense of storytelling – and British humor – were front and center, and she candidly spoke of her love for history, gardening, preservation, farming, heritage and England’s wildlife, as well as what it’s like to live in a 300-room house on 6,000 acres of land that doubles as a tourist destination.

As Steven Feinberg, Executive Director of the Rhode Island Film and Television office, said when he introduced her on Wednesday: “Behind every great mansion is a great lady.”

“Everything I do at Highclere is about the people,” Lady Carnarvon said, noting the house has been in her husband’s family since 1669 and that there has been some kind of home at Highclere since 749 AD. For her, being Lady of Highclere is to be a steward of the land and a keeper of heritage, honoring and preserving both for future generations. “You never know what you’ve lost until you’ve lost it,” she said.

About the show, which made Highclere one of, if not the most, famous houses in the world, she says it was “a fortunate, serendipitous collaboration.” “It was a joy getting to know the crew,” she said, noting there were a few tense moments and that living with a film crew for six years had its drawbacks, but overall, it was a positive experience. “Being integrated into the filming was really key,” she said.

The house currently has 2 full time housekeepers, 4 gardeners (which is significantly less than the 100 gardeners who were employed in 1908, when the property spanned 12,000 acres), 4 fulltime chefs, an office staff, a gift store staff and parking attendants and, of course, many tour guides, who are posted in each room of the house when it’s open for touring. And then there are 7 dogs and an assortment of farm animals, including a heritage breed of pigs that was nearing endangerment in England.

“I’ve learned over time what suits the house and us,” she said of having her home open to touring, which is not all of the time and which usually sells out far in advance. “We need Highclere Castle to settle every so often,” she said, emphasizing that she’s in the business of offering people experiences, and that every tour is a little different so that visitors have a reason to come back. “It’s thinking about the different stories and how people lived,” she said of her job, and vision. “There are so many stories yet to be told.”